Harlow travelled to third placed East London on Saturday knowing that to keep their challenge for the league title alive nothing short of a win would do and preferably to secure the bonus point for a 5 point win. The home side had been performing well all season so it was not going to be an easy task. After two recent wins by 100 plus points it was going to be back to a real contest for Harlow.

In the first couple of minutes Harlow had to defend before finally moving up into the London 22 and from a rolling maul prop forward Jack Christy forced his way over for the try. Kicking into a strong wind Danny Smith was just wide with the conversion but Harlow were 5 points ahead and were going to keep in front all through. Ten minutes later from another attack scrum half Charlie Woodington gathered the ball and just made the try line under the posts. Danny Smith converted for a 12 – 0 lead. East London were attacking strongly but committed tackling and good clearance kicking by Harlow kept them out. Then on a Harlow break open side flanker Michael Weston ran in Harlow’s third try. Ross Stalley slotted the conversion for a 19 point lead.  In the final minute of the half the Londoners broke through for a converted try making it  19 – 7 to Harlow at the interval.

The home side opened the scoring with a penalty in the first minutes of the second half. Two minutes later Smith replied with a penalty for Harlow taking the score to 22 – 10. Play progressed with both sides looking for a breakthrough but finding the defence too strong. Then with 15 minutes to go Weston added the all important 4th try for Harlow to secure the bonus point and a  27 – 10 lead. With 7 minutes to go Danny Fitzgerald crashed over from a driving maul for another Harlow try making the score 32 – 17. In the final few minutes East London came back strongly with two tries, one of them converted making it 32 – 22 at the final whistle.

The win puts Harlow at the top of the league, 3 points ahead of Wanstead. This Saturday Harlow travel to Kings Lynn to play West Norfolk who are 9th in the table.  A win would guarantee the title for Harlow but  the long journey and a Norfolk side who will want to finish the season on a high note means that Harlow will need to pull out all the stops. 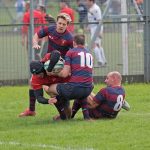 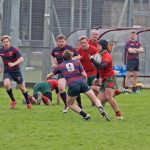 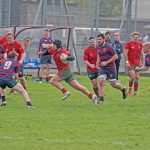 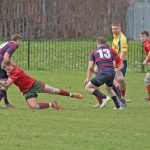 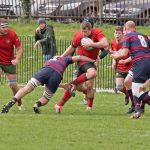 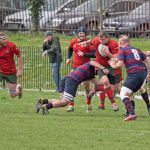 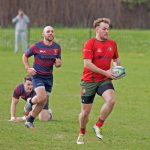 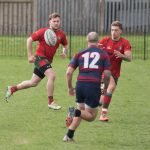 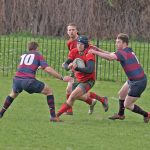 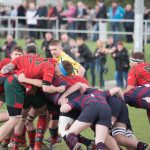 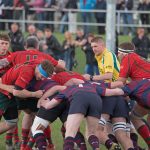