There was a poignant tone in The Rams visit to Maldon on Saturday following how events unfolded during the last meeting of the two teams but there was also a determination to come away with the victory and an unbeatable position in this seasons league table.
The squad were missing a few members of personnel for the fixture but were augmented by the return to action of Andy Quinn, James Roberts and James Fricker and also by the last minute additions of Chris Ellis and Mark Wedd to fill the temporary gaps in The Rams front row.

The Rams started the match at a tremendous pace which visibly rocked the home team onto the back foot. The driving play of the forwards coupled with the pace of the backline were too much for Maldon to cope with and before long the continuous pressure brought its just deserts; Alfie Clark stepping his way through the flailing defenders to post the first points of the day.

Two minutes later and he had touched down his second following the official awarding the visitors a penalty ten metres from the Maldon tryline. Clark immediately snatched up the ball, took the quick tap and weaved his way through the retreating Maldon pack, this time Chay Clark adding the extras; 0 – 12.

There was to be little respite for the home team as Harlow fielded the restart kick and went straight back onto the attack; Will Grimley picking a line of running that saw him ghost through the defensive line before supplying the try scoring pass to Chay Clark; 0-19.

This score sparked a brief Maldon fightback but The Rams defence held solid, driving the oncoming attackers back in the tackle and fighting feverishly for possession at the breakdown before James Clark put a stop to the home teams ambition, racing in to score the fourth Harlow score of the day. 0 – 26 and every point scored by a Clark! Something had to be done to break the Clark family’s monopoly on the scoresheet and who better to put a stop to said monopoly than Danny Fitz, powering over on the thirty-seventh minute mark to round off an emphatic Rams first half display; 0-33.

Maldon started the second half strongly, holding onto possession for the first few mintues and putting The Rams defence under a fair amount of pressure but again the defence held true, eventually forcing the turnover and the home team were back in their twenty-two defending hard.

What is pleasing to see with this Rams outfit is their willingness to put into practice the moves that they are being shown on the training park and it was one of those plays that saw Alfiie Clark put Will Grimley into the gap for the next score. Grimley hit the gap at pace and with a line that saw the desperate defenders grasping at thin air as he sailed in under the posts; 0 – 40.

James Roberts was next to cross the line following a passage of play that saw the ball shipped through a dozen pair of hands, the interplay and support running mesmerising the defenders and creating the merest of openings for Roberts to exploit; 0-47.

Despite the scoreline, the home team had far from given up and eventually forced an opening in the Harlow defensive wall, running in a deserved score but their efforts were soon brushed aside by quickfire touchdowns from Dan Stevenson and Tom Allen before James Fricker marked his return to Rugby with another; 05- 64.

It may have been a case of the visitors easing off slightly but the home team finally came to life an ran in two late scores, the second of which was a quality effort.

The last word was to be with The Rams. Mitchell Hodgkinson crashing over on the stroke of fulltime following another period of intricate passing and strong support running; 17 – 71 and final whistle. 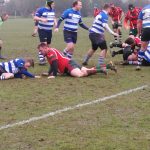 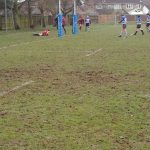 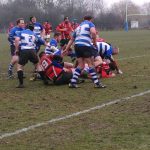 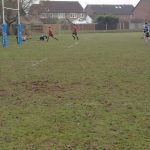 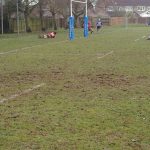 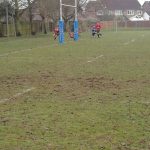 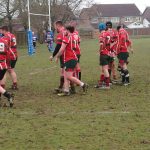 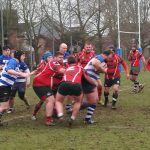 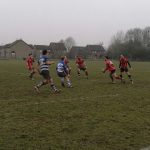 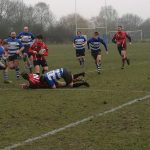 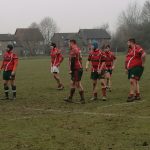 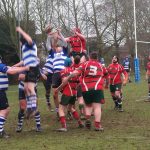 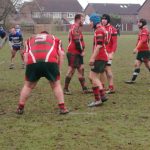 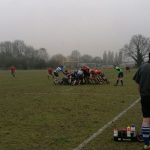 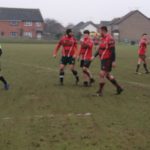 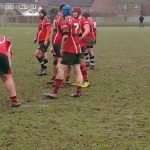 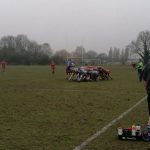 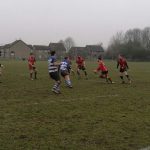 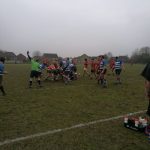 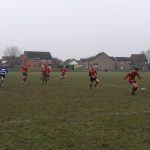 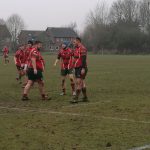 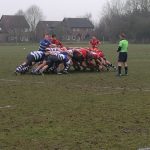 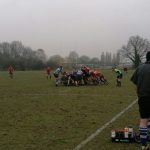 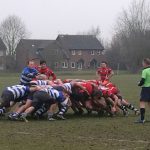 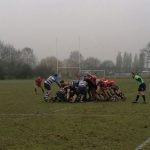