Harlow’s unbeaten run at home continued on Saturday with a 34-26 win over fellow high fliers Southwold.

Playing down the hill, Harlow got off to the perfect start when Michael Weston, captaining the side in Shaun Robert’s absence, claimed the kick-off ahead of the visitor’s pack. Two phases later Harlow scored in the corner when Andrew Tarsey burst through the Southwold defence and offloaded to Ryan McGlone to touch down in the corner.

The home side continued to dominate the opening exchanges with excellent defense and counter rucking ensuring Southwold could not get going and soon found themselves 12-0 down. Good work from the Harlow pack in turning the ball over in the visitor’s half was followed by excellent hands from the backs, first from Whitby, then McGlone who put Mackie away for a walk over try.

Harlow refused to let Southwold out of their own 22 and the pressure eventually told with Tarsey capitalising on a wild pass to intercept and score in the corner.

With 35 minutes gone Southwold finally went on the attack after a poor chase from the men in red, touched down in the corner. The conversion was missed.

Harlow went back on the attack in the final minutes of the half. Weston carried the ball into the Southwold half before off loading to Mackie who completed his hatrick.

The second half was a different story altogether with Southwold immediately on the front foot. Playing down hill they began to dominate the set piece and quickly scored two converted tries to get back within 10 points.

Harlow rallied on the hour with spirited defence eventually forcing a mistake for Tarsey to break out and run the ball in from 60 metres for his second try.

However, Harlow managed to hold on, eventually winning 34-26.

Speaking after the game, Man of the Match Andrew Tarsey said, “We’re delighted with result. We showed a lot of character in the second half to secure a good win against a decent team.”
Tries: McClone, Mackie (3), Tarsey (2)
Conversions: Ross Stalley (2)
Penalties:
Drop goals:

Take a look at the league table here 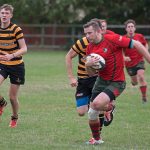 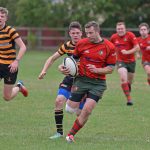 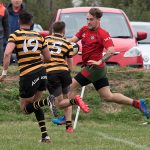 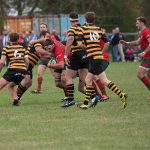 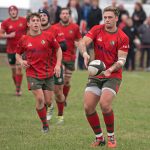 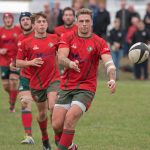 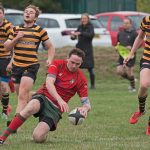