On Sunday morning 7th November 172 Harlow Members including members of the county’s management team, club officers, minis and youth sections joined Peter Wheeler, RFU Immediate Past-President in a walk around the club’s perimeter covering a collective distance of 153.3 miles in support of the Injured Players Foundation (IPF) and as part of the RFU’s official 150th Anniversary celebrations. 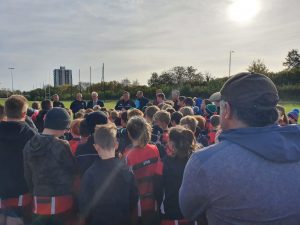 The RFU Injured Players Foundation (IPF) is an official charity of England Rugby and Supports & Protects the whole Rugby Family.

The charity are there to give support and information to rugby players who have sustained a catastrophic spinal cord or traumatic brain injury which has resulted in permanent disability whilst playing rugby in England at any level and any age. The support is available to help players through recovery, rehabilitation and for the rest of their lives.

The charity can also provide family members, clubs and team mates with the information and support they need following such incidents, particularly in relation to how they can help the player with their recovery or adjustment to a new life.

As part of the charities work they also fund research into how such injuries can be prevented, and work with the Rugby Football Union to reduce injury risk across the game.

Once again a great day for the club and we are rightly proud of every single member, player, parent etc., that joined in the walk and made it so special!